There are only so many times and ways I can say, “Dear friends, most of you are lovely, respectable people, but a select few of you make exceedingly poor choices in public. This causes me a great deal of both emotional (“It burns, precious!”) and physical pain (via facepalming).”

But hey, for the heck of it, let us just review some things:

— “I’m the next J.K. Rowling! You’ll regret this!”
If you follow Pam at Foreward Literary, you may have seen her post answers to questions she receives on her tumblr. “Aha!” you may think. “Aha! Here is my chance to do something sneaky and be anonymous!” I’ll give you a hint: NO. Anonymity does not give you license to do anything stupid like the person below. Even if the agent/editor never figures out who you are — and oftentimes, it is VERY easy to figure out who you are — this kind of attitude will not get you far in the literary world. No matter what happens, you say, “Thank you for your time.” Then you move on. 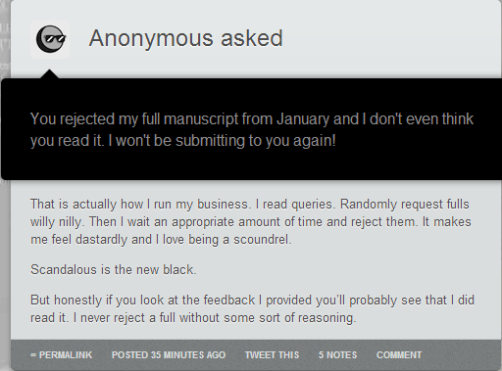 — “Hey! Agents are online! I CAN PITCH THEM IN REAL-TIME!”
Oh, freaking heck no.
Whether it’s #MSWL, #askagent, or just any old time you feel like it, DO NOT DIRECTLY PITCH TO AGENTS ON TWITTER. Was that not clear enough? I’ll say it again, just for clarity.  DO NOT DIRECTLY PITCH TO AGENTS ON TWITTER. (Or Facebook. Or Tumblr. Or LinkedIn. Yes, this happens. No, YOU should not be caught dead doing it.) Even during twitter parties like #pitmad, you shouldn’t be directly tweeting at agents about your manuscript. (Some agents/editors will hold pitch parties where you are pitching directly to someone, but that is rare — make sure you know the rules before ANY contest.) 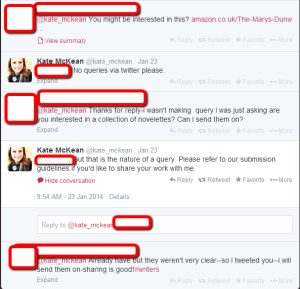 — “You don’t understand me! Here are all the reasons why I’m right and you’re wrong!”
Whether you’re talking to an agent or critique partner/beta reader, getting defensive about criticism is a bad move. An even worse move is  doing it in public. If you get criticism from someone, read it, then take a breath. Take a break. Consider it. Let it sink in. Remember that you have ultimate control over your manuscript, but that you may not be able to see if things aren’t working. Consider it again. Then decide what to keep and what to discard.  Thank them VERY politely for their time, and move on. Remember, if and when you get published, readers will be splashing their opinions all over the internet. You can’t — and shouldn’t — fight all of them.

What other mistakes do you see people making online?

One thought on “Do Not Be This Person”