“Oh, Rae,” you may say as you glance at the title, “isn’t this just an excuse to fangirl about all the wonderfully nerdy things at Salt Lake Comic Con?”

The answer is YES.

I generally don’t sew. When I put together a “costume,” it’s usually bits and pieces thrown together from around my wardrobe. Some people can pull off this kind of costume. I cannot.

Luckily, I have a wonderful “do-it-yourself” husband who insisted that we make our own costumes for Comic Con. I protested (ok, complained) loudly throughout the process, but ended up with a pretty dang spiffy result, if I do say so myself. Lots of people wanted to take pictures with us, and I’ve never felt more proud of my handiwork.

Bottom line? Whether it’s that synopsis you’ve been putting off or even that outline that’s going to make writing your next WIP easier, do as Scar says and “BE PREPAAAAAAARED!”

2. Good things (even small ones) come to those who wait.

I hate lines. I hate crowds. I hate B.O.

Getting a chance to see the AMAZING Sir Patrick Stewart meant facing all of the above. At once. *cue horror noises* We spent a little over an hour pressed against thousands of people in a compacted “line” just for a chance to see him. And guess what? SO WORTH IT. Crappy seats, bad lighting, way too many people pressed closed together? Didn’t matter. BECAUSE IT WAS FREAKING SIR PATRICK STEWART. 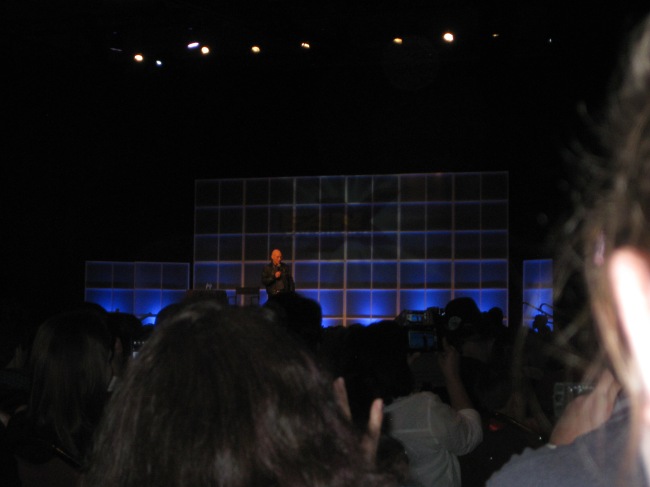 If I spent the entire con waiting in lines to see people speak, I never would have seen these awesome people and the hundreds of vendors peddling their amazingness to us. Don’t spend so much time waiting that you miss out. 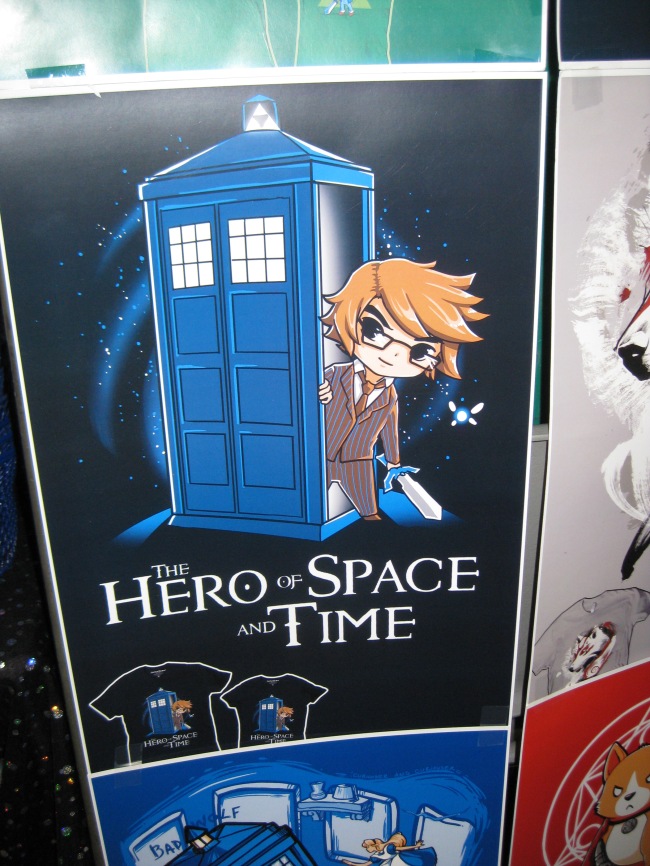 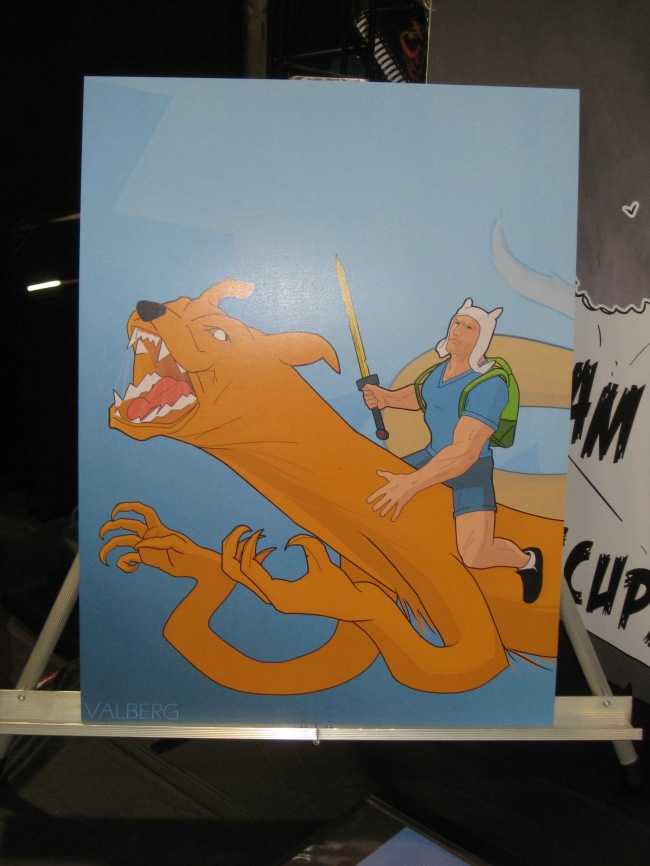 4. No matter how prepared and prioritized you are, sometimes the most amazing things pop up out of nowhere.

On the evening of the first day of the con, I was a bit cranky and lonely. My husband was waiting in line for a panel, and I felt like I’d seen enough for one day, and I headed to the bathroom to fix my hair and clean up my makeup. I was just washing my hands and feeling sorry for myself when a blonde woman walked up and started washing her hands next to me.

Yup. It was DENISE CROSBY. (Tasha Yar + Sela on Star Trek: The Next Generation)

I hadn’t expected to see any of the special guest stars up close because you have to pay between $20-100 just to go up and talk to them. And yet here was Denise Crosby, as sweet as can be, washing her hands 2 feet away from me. I said something very suave like, “Oh wow. I didn’t expect to run into you here.” Thankfully, she laughed. Best surprise EVER. Sometimes the best chapters end up being the ones you never planned for, too.

5. Suck it up and take some risks.

I’m not afraid of walking down the middle of a posh mall wearing Dark Jedi robes and face paint. In fact, I did that twice this week. I am, however, terrified of annoying/bothering people who don’t want me around. Besides the cost, this is another reason why I generally don’t do celebrity meet and greets. They have enough to worry about without me fangirling all over them.

But today, I noticed that two of my childhood heroes — Jeremy Bulloch (the original Boba Fett) and Nick Gillard (stuntman and fight coordinator for Star Wars) — had put up a sign that said “FREE meet and greet.”

And the line was pretty much empty. (Everyone else was in line to see Nathan Fillion.)

I took a very deep breath, sucked it up, and walked over.

We ended up talking for nearly 10 minutes.

Jeremy Bulloch is a lovely, soft-spoken British man who left school at age 12 (after flunking English twice) to pursue his dreams of acting. In between roles, he hired himself out as a house decorator to pay the bills and feed his children. His parents, to their dying days, still told him to “think of what you could have done.”

Guess what? He did what he loved. And he has thousands of adoring fans, myself included, who are so happy that he followed his dreams. Now he has a lovely family, including a son who is an editor and book translator. His son’s favorite advice when editing Mr. Bulloch’s book? “Cut the waffling, Dad. Just say what you’re going to say.”

(Don’t know who Boba Fett is? Look him up. He is the embodiment of “less is more.”)

6. (As an addendum) Enjoy the little things and don’t let anyone tell you that you shouldn’t.

But the person who stands out most in my mind is not one of the super famous people I usually fangirl over.

Let me ‘splain. When I was nine years old, I saw the most epic fight ever: Duel of the Fates. Qui-Gon and Obi-Wan versus Darth Maul. FREAKING EPIC. I started “lightsaber training” with my little brothers and watching all of the “behind-the-scenes” features with Nick Gillard, the man who choreographed the fight.

Now, fifteen years later, I got to talk to Nick, who told me my costume was better than a lot of the ones he saw on the set of Star Wars. (SQUEEEE!) Most people wouldn’t consider meeting a stuntman and swordsmaster the highlight of their day or even month.

Guys, this made my LIFE. Nick Gillard was one of the sweetest and most genuine people I’ve met. He told me about how much he enjoyed being at this convention (he usually doesn’t enjoy them), that Utah people were inexplicably the nicest people he’d met. He asked if he could get a pic with us. He was an all-around down-to-earth, wonderful human being. I’ll treasure the ten minutes spent talking with my childhood hero, no matter what anyone says.

Enjoy the little victories, the little dreams coming true. Don’t let anyone rain on your parade.

7. Have a little faith in people.

I often despair about the fate of humanity. I see things that make me groan or facepalm or even weep. But these last few days have reaffirmed my faith.

It was nothing huge. Just people being decent human beings. Taking pictures for strangers. Complimenting each other on creativity or workmanship. Playing with a fussy child while a mother digs in her bag for a pacifier. Resisting the urge to trample each other even when there are limited spots available in a panel. Sharing their love for all things nerdy and awesome.

If life or writing’s got you down, have a little faith. We’ve got your back.

One thought on “Life (and Writing!) Lessons from Comic Con”